On March 5th, Peggy Smalley, our County Chair, was recognized by DAWN’s List with this year’s Local Elected Official award. Congratulations to Peggy and thank you for all you do for Audubon County!

Peggy has been actively involved in Audubon County Democrats since 1990 when she ran for County Treasurer for the first time. She was elected to 5 terms without opposition. 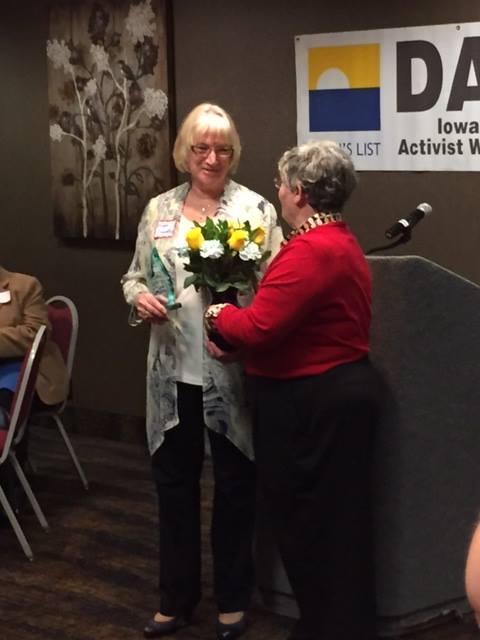 The purpose of the DAWN’s (Democratic Activist Women’s Network) List awards is to acknowledge Democratic activist women across Iowa. DAWN’s List is not part of the Democratic Party. It was started 23 years ago to recruit larger numbers of progressive Democratic women run for State and local offices throughout Iowa.

1. Raise awareness, across the state, of the importance of gender equity in public offices.
2. Establish a strong, state-wide grassroots network, supporting the election of Democratic pro-choice women to public office.
3. Publicly support currently elected pro-choice, Democratic women in the Iowa legislature and assist in their re-election campaigns.